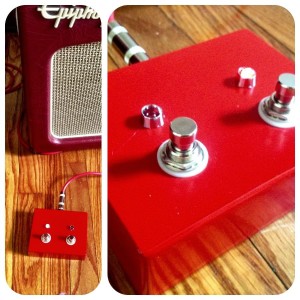 I few months ago, I had been eying  a used Epiphone Triggerman 60 Guitar Amp at Morelock Music in downtown Knoxville. I had decided I had to get it, and had started planning to go pick it up. But before I could, my lovely and thoughtful girlfriend surprised me by bringing it home as a gift. You can’t beat that!

Unfortunately the original footswitch was not included with the amp. I had been searching the web for a replacement but I couldn’t find much information about the amp’s footswitch itself. I have very little experience with electronics, but the concept seemed simple enough, so I decided to make my own. I thought sharing this information might help someone else looking for a replacement footswitch. Since most amp footswitches are fairly similar, this will likely work for a lot of other amps out there.

Altogether, The parts for this 2 button DIY guitar amp footswitch cost only around $25. Here is what you’ll need.

The Epiphone Triggerman 60 has 2 channels, as well as an on / off for the DSP effects, so a two button foot switch was in order.

To determine which connections of the pin would control each circuit, I started by simply plugging in a stereo 1/4 in cable into the footswith jack. I used a small copper wire to try out different connection combinations. Based on my tinkering, I drew up a wiring plan as seen below.

Here is the wiring plan I came up with: 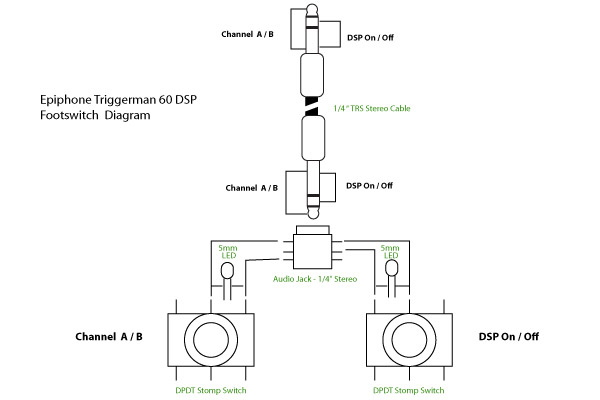 Joe’s early passion for art and music led him to study fine art at the Laguna College of Art & Design. With this background in art and design, he pursued work as a graphic designer. While working with website hosting companies and marketing firms in southern california, he gained invaluable technical knowledge and experience that would shape his career. Working within the challenging limitations of the early days of the web, Joe leveraged his problem solving skills to become the rare web developer who could bridge the gap between the disciplines of design and programming.
Posted in Gear & Gadgets, Music